The following is a list of common popup messages on the mobile devices and their explanation.

This message occurs when a pre-seller attempts to place a return (or negative quantity) in a pre-sell order on the handheld when the Allow pre-sellers to schedule pickups checkbox is not checked. This setting is on the Configure Database Handheld Panel. 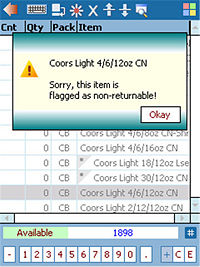 This screen is displayed if the user does not have permission to enter in negative quantities for a specific non-returnable item. For more information, see Overview: Returnable and Non-Returnable Items.

Each time a mobile device is synced, the data being uploaded is captured by the server before it is posted to the database. After the data is posted, the captured data is validated against what was posted to ensure no data was dropped. If the server identifies a discrepancy, it will return a message to the mobile device instructing the user to either re-submit the data (perform the sync again) or contact Rutherford Support.

It is possible to update a MBO goal through the Recap menu. However, if you try to update a goal that has already been recorded, the above message will appear when tapping the hyperlink Update selected goal.

If no supplier has been selected and the user taps the Plant hyperlink, then the following popup will appear:

If a selected supplier has no plants associated with them, then the following popup will appear:

"Orders are On Hold. These orders will not be transmitted."

Off-truck or pre-sell users can proceed with an upload-only operation even if there are orders on hold. If users selects to perform an upload-only with orders on hold the message "Orders are On Hold. These orders will not be transmitted" appears. If the user proceeds, then the held-open orders are removed from the current mobile upload (the web service will not see them) and, after the upload only is completed, moved into the new mobile upload.

eoTablet does not currently support the putting a pre-sell order on hold. The user is still not allowed to do a full-sync while an order is on hold.