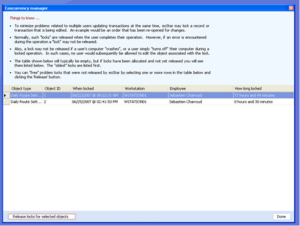 File>Database Administration>Concurrency Manager screen
The concurrency manager is a tool designed to release locks created by eoStar. Concurrency locks are a way to assign ownership of an object (order, purchase, reconciliation, etc.) so that only one person at a time can edit it. If the computer or eoStar crashes while in an order, purchase, or reconciliation, the lock may not be released. As a result, access to that object may be denied. To re-establish access to that object, the concurrency lock needs to be released.

Access to the concurrency manager is restricted to users with the proper permissions and the Administrator login. The permission check box File>Database Administration>Concurrency Manager can be found under the Records>Employee>Records Plugins panel underneath the heading "eoStar Core".

As of September 2008, it is now possible to release Concurrency locks from an error message without having to go to the Concurrency Manager screen, if the user has permission to do so. The two error messages are as follows: