The following are frequent problems users experience with the handhelds or tablets and their solutions. If you have any questions about the information listed on this page, feel free to call Rutherford.

This issue is probably due to the battery having lost its charge. Check the battery for the mobile device or call the company IT personnel or the Mobile Device Provider.

Call the company IT personnel or the Mobile Device Provider.

Typically, this means that the device is stuck on one screen or the timer bar continues for an unexpected long period of time. This may occur during the use of the eoMobileCF and may be caused by many reasons. A typical fix for this issue is to warm boot the device. To warm boot the device the user either needs to press and hold down the off button until the device powers down or the user needs to press the reset button located on the bottom of the device near the stylus. If both these options should fail, call the company IT personnel or Rutherford Support.

Occasionally, mobile devices become so damaged that it is impossible to use them again. An example of this is that the mobile device is run over by a truck multiple times. While the device may no longer be operational, it may be possible to retrieve any stored data from the device depending on the extent of the damage.

First call the company IT personnel to see if they may retrieve or revive the device. Some suggested ideas on retrieving the data stored on the device is to use a USB cradle and download a (trial) version of the device's pocket controller to be used on a workstation. Load up eoMobileCF and full sync, to get any needed orders or deliveries off the device and into the backend system.

Each copy of eoMobile must be licensed to be used. The error message "Handheld Not Licensed" means that for one reason or another, the handheld has not received a license. Contact Rutherford.

Losing Orders or Deliveries on the Handheld (disappearing tickets)

The Proper Prices, Discounts, or Promotions are Not Showing on the Tickets

This is easily remedied by performing a full sync. If this does not fix the issues, call Rutherford support.

Out of Memory Error

During a full sync, eoMobileCF downloads all product images, documents, inventory tags, etc. onto the mobile device. Check with the company's IT personnel to determine which unused applications and documents can be deleted from the mobile device.

Out Of Memory Error on Warehouse Handhelds

The out of memory exception is due to the number of inventory tags downloaded onto the warehouse handheld. The tags are downloaded to determine if they are still active; however, large quantities of these tags will overload the system. If the out of Memory exception happens, purge the old tags to less than 6000. It is suggested to purge tags with a CountTime more than 90 days ago. Inventory tags may also be purged in the backend system on the Records>Warehouse>Records Inventory Tags panel. To purge inventory tags older than 120 days, click the command button Purge Stale Inventory Tags >120 days.

Erased Items Leading to a Failed Sync on Pre-Sell Handhelds

When a pre-seller handheld attempts to post an order containing an erased item on it, the note line (Item name Override) may be longer than sixty characters which will cause the sync to fail. After a sync failure the issue may be viewed in the "Problem Details". To fix this situation, the Pre-sell order can be re-opened on the handheld and the item may be erased. Or in the Backend the user may re-activate the item.

eoMobileCF looks like it is going to open, but doesn't start. These steps are used for handhelds that have data that has not been synced and have a memory card.

First, make sure that eoStar is not in the Running Programs (Start>Settings>System>Memory>Running Programs). If it is, close it and try starting eoStar again.

If that does not effectively correct the situation, then call Rutherford.

When a user views a .wma file downloaded with the Handheld Documents on Windows Media Player and then taps the "X" to close the file, it continues to remain running on the mobile device. When the user then tries to full sync, the file cannot be deleted. When the full sync fails, the error message "Can't delete file... access denied" is shown. (With every full sync, the system deletes and replaces all handheld documents.)

To fix this error, the user must go to Settings>System>Memory>Running on the mobile device and Stop the Windows Media Player. Then the user may full sync.

In order to save a $0.00 invoice, add a billing code to the invoice, then save.

This is when two or more invoices contain the exact same products, customer and amounts within the order. This may be caused by a driver changing the order into a charge and then taking cash. Call Rutherford support.

Unable to Enter Returns or Dunnage to an Invoice

There are two major reasons why Dunnage or product returns cannot be added to an invoice. It may be due to the fact that it may be added to the wrong invoice or that the products status is incorrect.

Additionally, dunnage may not be added if the Is an Empty status is not checked on the Product Records.

The WI-FI is Down

Many mobile devices can be attached to a computer using a USB cradle. Use a cradle and active sync to retrieve the data from eoMobileCF.

This can occasionally occur where the backup card was wiped but the data is still contained on the handheld. To put data on the card, use the backup option in eoMobileCF.

Hold Codes will not affect any deliveries. Hold codes are only designed to prevent new orders from being placed, not prevent all transactions with the customer.

The user's permissions have changed. Check with the company IT personnel to examine the permission settings for the employee.

There are several errors caused by using a different size paper on Zebra printers. One of these errors causes reports to truncate on the right side. To fix this make sure the paper is: 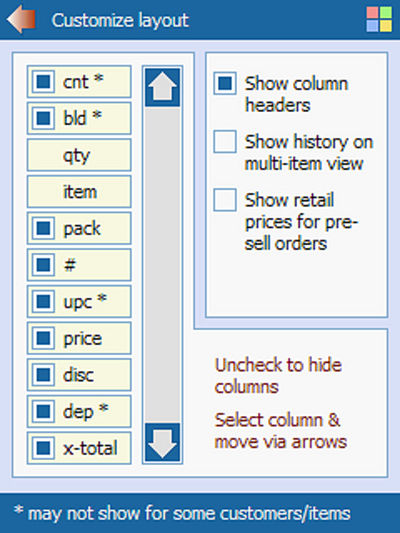 There are a couple of messages that MAY appear when using Bluetooth connected Symbol/Motorola device to a Zebra printer.

This message occurs when printouts are queued up very rapidly by the user, so the Bluetooth stack may be in the middle of automatically disconnecting a Bluetooth _automatic_ connection. This is NOT an eoMobile message, but a BTExplorer error shown under this circumstance. The user can only click Ok.

If this occurs, eoMobile will then show the following error:

After this issue occurs, the user can retry to print the printout again.

This issue has been addressed on 7/22/2009. Now, the mobile software checks the printer and waits for the prior print job to complete before sending the subsequent printout.

This is only an issue if you are running a version of eoMobile that is from the 9.5.22.xx branch.

First, some background about how the handheld tracks user data:

As users work on the handheld, the handheld needs to keep track of everything that’s done. It keeps that information in main memory, and it also backs it up to disk, in case the application is closed or power is lost. (It also puts it on the backup card, but don’t worry about that right now.) When it backs it up, it puts it in files like “upload01.txt” in the program data directory. If you load up the application, it will read “upload01.txt” right away, and see all the things that have been done.

Eventually, when the user syncs the handheld with an “upload only”, the data gets sent to the web service. We send each clump of data with a unique identifier that was created the last time the user did a successful upload. That way, the web service can be smart enough not to import the same data twice.

Now we know enough to talk about what’s gone wrong. Here’s the sequence of events that we’ve seen happening:

First, the user starts the handheld and does some work. Perhaps she makes some pre-sell orders. We make an “upload01.txt” for her, and give it unique identifier 123456789. In the middle of her work, she restarts the application. Maybe the handheld ran out of charge, and she rebooted it.

However, she gets a little impatient waiting for it to start. After clicking the “eoMobileCF” icon, while it’s loading, she clicks it again accidentally! Now, 2 copies of the application will start. The first one starts, and she starts working on it and doing her usual route. Meanwhile, the second one starts up in the background. Let’s call these two copies A and B. Both of these copies start out looking at the data currently in the system (unique ID 123456789!)

Our user now makes some more orders using copy A. When she’s done, she syncs. Now, let’s see; what happens to her stuff? Copy A sends all the orders since she first started (ID 123456789.) Those orders go to the web service fine, and nothing is wrong. So she stops, closes copy A, and goes home for the day.

The next day, she picks up her handheld, but eoStar is already running; it’s running copy B. Remember, when copy B last left off, it only had her first pre-sell orders that she made before the restart. So those are the only orders copy B knows about! Now, she makes some more orders.

She syncs again. Now what happens to her stuff? Copy B thinks that it has two bunches of orders, with ID 123456789. However, when those orders get sent to the web service, it’s already seen number 123456789, so none of them get posted. Half of them were duplicated from the earlier sync, so that’s OK. But half of them were brand new orders that will never get in now.

The whole problem was caused because the user was running two copies of the application both at once, accidentally. To fix it, we’d just like to stop the user from starting more than one copy. So when the app starts, we talk to Windows Mobile, and mark a special token in the OS signifying that eoStar is running. If they try to start a second one, it’ll see that our token is already in use, and we can do something about it.

Here is the expected behavior once the hot fix is installed:

On another note, because two sets of the data files were maintained in memory, this might also be the reason why users have experienced memory issues that required frequent warm boots throughout the day.

The hot fix is currently in QA and we are hoping to release it this week via the Mobile Device Manager. As a temporary workaround, please instruct your users to click on the “eoMobileCF” icon only once when launching the application.